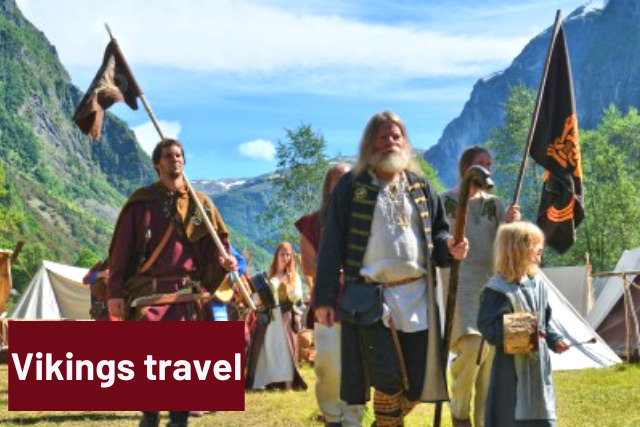 On May 17th, the Vikings began their journey to the New World. They traveled over 3,000 miles, landing on the shores of the New World in Vineland, New Jersey, where they settled in a small village called Leifshist.

How far did the Vikings travel? The Vikings were Scandinavian people who migrated to Iceland, Greenland, and North America.

In the past, there were many myths about the Vikings. There was a common belief that the Vikings were the most savage people who lived on Earth.

But today, the truth is that the Vikings were the most advanced people who had a very advanced civilization. They traveled throughout the entire world and made a significant impact on world history.

They were also known to have explored the Mediterranean and Black Seas. They traded with the Arabs and Byzantines.

How Far Did The Vikings Travel?

Vikings – History of the Vikings

Viking – Vikings were known for their strong presence in European history. They were the strongest people of the time.

They were known for their bravery and courage.

Viking – The Viking lifestyle was very different from the European lifestyle. They didn’t follow any religion. They were mainly pagan people, and they worshipped nature.

Viking – The Vikings had a strong presence in European history. Europeans first explored the Atlantic and North oceans by them.

The Vikings used to carry a spear which was made of wood. They also used to have swords and shields.

The Vikings built their ships in the shape of a dragon. The vessel had a large rudder at the back, and they could not sail faster than the wind speed.

The Vikings spoke the Old Norse language, which is a Germanic language. They used to write their language using the runes.

The Vikings used to live in stone houses. The houses were built using wooden beams and thatched roofs.

The Vikings ate fish, meat, and vegetables. They also ate pork and mutton.

The Vikings did not believe in any religion. They used to worship nature and thought the Gods were present in nature.

Why Did the Vikings Travel?

In the year 985, the Vikings invaded England. The invasion of the Vikings led to the decline of the Roman Empire. After that, the Vikings were busy exploring the world. They had a great interest in the exploration of unknown lands.

Did you know that Vikings visited almost every corner of the world? The Vikings were very famous for their ships and their sea trade. They traveled across the oceans and saw nearly every part of the world.

The Vikings settled in Norway in AD 785, and in 930, they were driven out of the country.

The Norwegian government is now planning to construct a museum in the country to preserve the heritage of Vikings.

Vikings landed in Iceland in 930 but were driven out of the country in 1262. The museum in Iceland is named the National Museum of Iceland.

It is also known as the Danelaw because the Vikings settled in 871. The Vikings also established trading ports in the country.

It is also called the Viking Kingdom of Scotland. They started settling in the area in the year 870.

Sweden is the second largest country in Europe, and it is also the most populated country. The first Viking settlement was made in the year AD 963.

Did you know that the Vikings were great travelers who traveled to more than 100 different places? Yes, it is true. You heard it right.

It is the right time to know if you didn’t know that.

1. They were very good at sailing

The Vikings were the best sailors of their time. They had the most advanced ship technology, and they were excellent sailors.

They used to sail on the seas and were also good at fighting against enemy ships.

2. They used to use a compass

They were the first people who used to use the compass. It was a small piece of wood placed inside a box and fixed on the top of the mast.

3. They used to use the map

4. They were the first to use the horse

5. They used to eat raw food

The Vikings were the first people to eat raw food. They used to eat raw meat, fish, and even vegetables.

6. They were the first to make gunpowder

Yes, the Vikings, indeed, were the first to make gunpowder. They made gunpowder from sulfur, salt, and charcoal.

7. They used to wear the armor

The Vikings used to wear a helmet, leather belts, and a shield.

The Vikings traveled vast distances and lived in very harsh conditions. They could reach the Arctic Circle even further north than the modern-day one.

They traveled across the Atlantic Ocean and reached Ireland, which was a part of the British Isles at that time.

They were the first Europeans to explore North America and were responsible for introducing European culture to the native population. They brought horses and weapons and trained the horse collar to England.

I have also shared with you their lifestyle, weapons, and burial. I hope you like it.